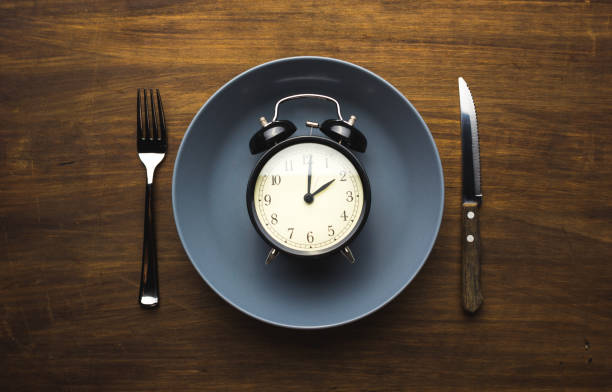 Alarm clock inside a plate

In today’s blog, we’re going to break down a recent study around Intermittent Fasting.

Specifically, we’ll be referring to the “lean gains” method. Which is a 16/8 method popularized by Martin Berkhan, and seen talked about often in today’s fitness community.

Some claims around the lean gain method include, but are not limited to…

Are the claims valid?

It’s important to note that up until recently, there has been limited research on IF which controls for things like nutrient timing, caloric, and macro equivalence, and specifically looking at trained individuals.

We’re mainly limited on these sort of studies in trained individuals, most have been done in untrained, sedentary populations.

I’m going to break down the study, and results, but first I want to share my own experience with IF, and my current hypothesis.

Personally, a few years ago while starting a business, and working 16 hour days, I would utilize IF, and loved it.

From productivity, and mental clarity standpoint that is. See, in the morning we tend to have a rise in cortisol, which is blunted once we eat.

This cortisol spike is accompanied by rises in norepinephrine and adrenaline, meaning we’re going to feel more alert, and awake.

This can be great, but we also are therefor risking leaving our bodies in a catabolic environment, and missing out on potential benefits of eating.

Some will elude to the evidence that while in a fasted state, we have elevated growth hormone levels. Even if that’s right, it doesn’t mean that it will have an effect on our physique.

From a muscle building and retention standpoint, you’re never going to convince me that not eating, is more anabolic than eating.

During my experience, I lost quite a bit of muscle mass and certainly didn’t add any new tissue. I stayed lean, which was because I had a hard time meeting my energy demands within a short window, but I also started to become “skinny fat.”

This isn’t to say that this can’t be a viable option for some.

For those also in a deficit, and trying to lose weight, and who may prefer to eat more food in the evenings, and don’t have much appetite in the mornings, I see this as beneficial for adherence.

Only if we’re cutting though. If we’re trying to build metabolism, and reverse dieting, for example, I think it’s essential to nourish your body throughout the day, with consistent meal timing.

What we do know from sort of refractory examples, is that every 3-4 hours or so, you have a unique opportunity to stimulate MPS.

Even if amino acid blood levels are stable, we know that MPS acts as sort of a dial, rather than an on-off switch.

So by eating only 3 meals, in an 8-hour window, we’re theoretically missing out on the opportunity to repair, and grow muscle at an optimal rate if we were to be eating say 4-6 meals. Although this is merely anecdotal, as the research tends to lean the other way.

In that, we don’t see a noticeable difference in hypertrophy when subjects consume 3 meals, vs. 6 meals, when calories and protein are equated.

However, this has typically been in un-trained individuals, so take that with a grain of salt.

This study also equates meal frequency though which makes this even more reliable.

So, enough about me. Let’s dive into the research.

Study methods: 34 resistance-trained males were selected at random and assigned to either a (TRF) group, or an (ND) group.

The TRF group consumed 100% of their energy needs within an 8-hour window, dividing their caloric intake within 3- meals.

The ND group consumed 100% of their energy needs in 3 meals as well but spaced out further apart in a 12-hour window.

Groups were matched for their calories consumed, and macronutrient distribution.

Subjects were tested in a range of markers before and after an 8-week period where they were also assigned a resistance-based training program.

The subjects were tested by dual-energy x-ray absorptiometry, and the muscle area of the thigh and arm were measured using an anthropometric system.

Other health and hormonal markers were assessed such as…

They also assessed strength through the bench press and leg press, which measured maximal output. Along with measuring the subjects resting energy expenditure and respiratory ratios to get a baseline on metabolic adaptations.

The two-way ANOVA, which means the comparison of the mean differences between groups that have been split on two independent variables (called factors).

So when comparing fat loss – the TRF group, compared to the ND group, had a P value of 0.0448 …. which by conventional criteria, this difference is considered to be not statistically significant.

Fat-free mass, muscle area of the arm and thigh, and maximal strength were maintained in both groups.

Testosterone and insulin-like growth factor 1 decreased significantly in TRF, with no changes in ND. Interesting…

T3 decreased in the TRF group, but no significant changes were detected in TSH. This is probably due to the duration of not having carbs, the TRF groups became more glycogen depleted leading to less conversion of T4, to active T3.

A high RER indicates that carbohydrates are being predominantly used, whereas a low RER suggests lipid oxidation, so this might suggest that the individuals in the TRF groups we’re experiencing more ketosis… which makes sense.

So what’s the bottom line damnit…

According to the study, they concluded that the only significant effect was that fat mass (FM) was significantly reduced in the IF group (losing around 3.5lbs or 1.6kgs) versus a non-significant loss in the ND group….

Well….. let’s look at this a little deeper.

If we look at how the calories were assigned, that’s precisely what we find. The IF group was eating around 200kcals less per day, than the ND group; as it appears they were slightly below maintenance when the study began, and this continued throughout the study.

The authors of the study seemed to overlook this small, yet fucking important detail.

As they claimed that the difference in fat loss could be attributed to the effects on the hormone adiponectin (which increased in the IF group but not the ND group), which may act in the brain to increase energy expenditure.

This might have contributed, but in my opinion, not to the extent of explaining the statistical differences in results.

This is because the major flaw in the study appears where there was no preliminary period to ensure all of the subjects were in a maintenance energy balance before the intervention.

Everything else related to strength, and body composition was pretty much identical between groups.

This study does, however, seem to shed evidence towards the modified IF employed in this study being a bit more advantageous for different health, and longevity biomarkers though.

Or in other words – the TRF with 16 h of fasting and 8 h of feeding, could be beneficial in resistance-trained individuals to improve health-related biomarkers, decrease fat mass, and at least maintain muscle mass.

This does, however, put the kibosh down on individuals who think that IF is some sort of “hack” on a physiological level for training, or “getting shredded” scenarios.

The IF group did lose a bit of fat as compared to the ND group, which can be explained by the fact that they were in a slight deficit (another score for the logical, objective crowd and CICO proponents).

With that said, if you’re dealing with some weird blood markers that you’re trying to improve, and especially if the IF pattern fits well in your daily schedule and lifestyle, it seems like it could be a viable strategy, with no real tangible downside.

If you’re in an intentional fat loss phase, and want to maintain as much LBM as possible throughout a long term dieting phase, we do have evidence to suggest that this might be a disadvantage for such.

This study does provide some evidence that IF may be more beneficial for your health than a traditional meal pattern.

I would also advocate in general to avoid training completely fasted if your end goal is primarily physique and performance-related, however, that’s a different conversation for a different day.

How to Get to the Next Level

Cold Showers and Why You Should Try Them